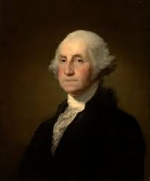 Throughout history, an Army's ability to fight and win a war is not solely dependent on weapons and training.  It also rests on the attitude of its commander.  As befitting a military hero, George Washington cuts a formidable presence.  A contemporary in the 1750s described him as "measuring six feet two inches in his stockings and weighing 175 pounds”.  By the time he became president, the 57-year-old Washington was certainly less agile, but even more imposing at upward of 200 pounds.  By then, he had survived an array of life-threatening situations and baptism by fire in the battlefields of the French and Indian War to the harsh winter of Valley Forge, rendering him a larger-than-life figure.

This presentation will be held online via Zoom.  Register and receive program link by entering your information below.  Any questions?  Contact DeAnne O'Brien at dobrien@ivpl.org.

Registration for this event has now closed.